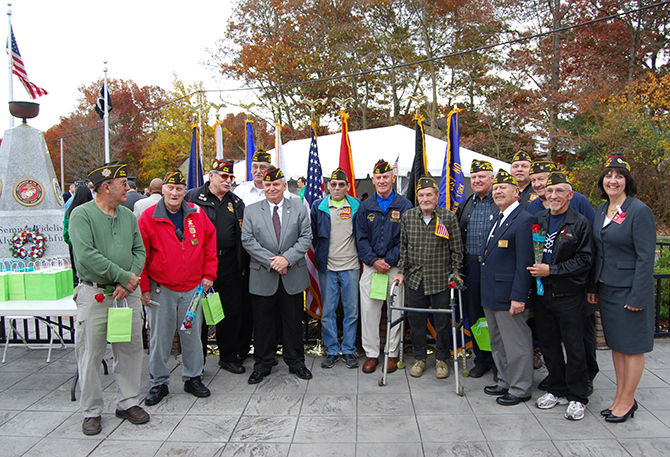 On November 7, the Village of Islandia held its annual Veterans Day ceremony at the Veterans Memorial Triangle. Mayor Allan M. Dorman, a Vietnam veteran, was joined by local elected officials, war veterans and representatives from the Central Islip Fire Department to honor those who served and continue to serve in the armed forces.

During the ceremony, Mayor Dorman asked those in attendance to remember local residents who served in the military and have since passed on. He also recognized all the local veterans’ groups that were in attendance and announced that the village has established the Col. Francis S. Midura Veterans of Foreign Wars Post #12144, located at Islandia Village Commons, and the designation of veterans-only parking spots in the Village Hall’s parking lot. The ceremony ended with village officials joining war veterans in placing a wreath and bouquets of roses in front of the memorial.

After the ceremony, members of Col. Francis S. Midura Veterans of Foreign Wars Post #12144 gave out gift bags to attendees containing an American flag and a green light bulb. Attendees were asked to replace their outdoor lights with the green light bulb on Veterans Week as part of the “Greenlight a Vet” project as a way to honor those who served our country.