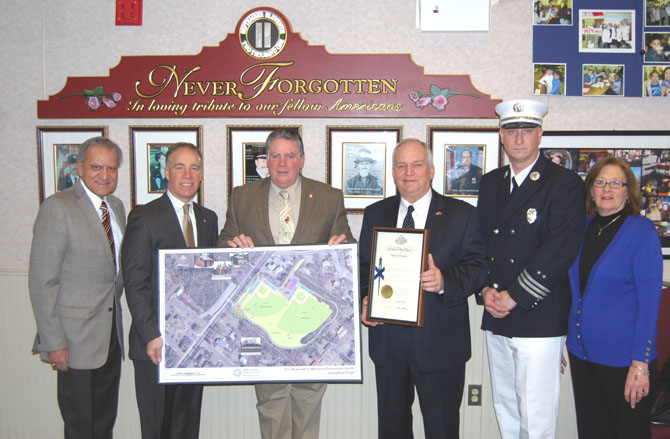 On February 14, Mayor Allan M. Dorman, Village of Islandia, was joined by local elected officials to accept ownership of Old Nichols Road Park from the Town of Islip. He received a certificate from the Office of New York Governor Andrew Cuomo giving ownership of the ball field, which will be renamed Village of Islandia First Responders Memorial Recreational Field.

In May 2013, New York State Senator Lee Zeldin and Assemblyman Al Graf co-sponsored legislation authorizing the Town of Islip to transfer ownership of the seven-acre Old Nichols Road Park to the village. The bill gives the village sole proprietorship of the ball field at no cost and provides the village residents with more recreational opportunities. The bill passed the Senate on June 17, 2013 and the Assembly four days later. It was then signed into law by Governor Cuomo on October 21, 2013.

The ball field will be renamed the Village of Islandia First Responders Memorial Recreational Field in honor of the memory of five first responders from Islandia who were killed in the September 11, 2001 attacks. Upon acquisition of the property, the Village of Islandia will construct a second baseball diamond on the field, complete with dugouts. Local businesses will help with the building of the ball field and will be asked to help maintain it once construction is completed.

“I wish to thank Assemblyman Graf, Senator Zeldin and the Town of Islip board members and its Parks and Recreation Department for this generous donation to the village,” Mayor Dorman said. “This ball field will provide our residents greater access to more recreational activities being offered by our village. We are also looking forward to the local business community providing its assistance in maintaining the pristine conditions of our ball fields.”