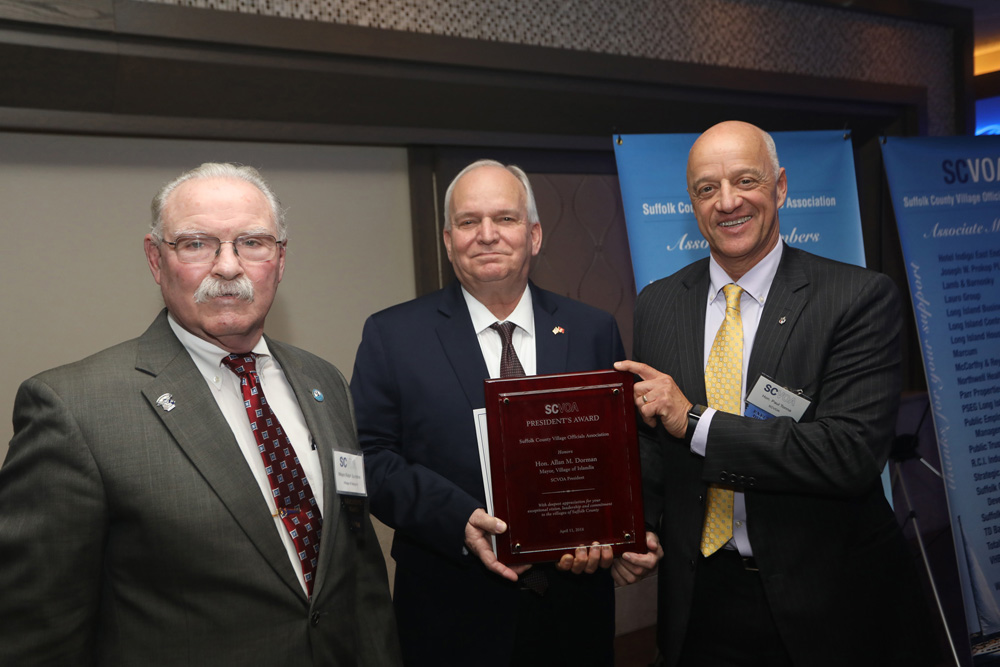 On April 11, Mayor Allan M. Dorman, Village of Islandia, who has served for the past three years as president of the Suffolk County Village Officials Association (SCVOA), received the President’s Award at SCVOA’s Legislative Dinner and Awards Night, which was held at the Hotel Indigo East End in Riverhead.

During his time as SCVOA president, Mayor Dorman led the fight against unfunded mandates, including Governor Andrew Cuomo’s Shared Services Property Tax Plan, which was passed by the New York State Legislature without any input from local government. He has also worked to increase the recognition of benefits offered by village government, such as fiscal responsibility, cost-effective services, and enhanced quality of life for all village residents.

The event also featured a passing of the torch as Mayor Dorman handed over the presidential duties to Richard B. Smith, Mayor, Village of Nissequogue.

“I am honored to receive this award from an organization I was proud to serve as president,” Mayor Dorman said. “I also wish to congratulate Mayor Smith on his new position. SCVOA provides an invaluable service to village officials and employees through training, knowledge-sharing and support, while, at the same time, advocating on behalf of local government and residents on the county, state and national levels. I am proud to have served as president and I look forward to making contributions as a member of the Executive Board.”

“I want to congratulate Mayor Dorman on receiving the President’s Award,” Mayor Smith said. “SCVOA has seen extremely significant growth while he served as president over the past three years. During Allan’s tenure, SCVOA has greatly expanded our service to our village members. I’m very honored to serve as president of this fine organization and I look forward to working with Allan in serving our members.”

“Mayor Dorman embodies all we hope to accomplish as public servants and strong advocates for the villages,” said Hon. Paul J. Tonna, Executive Director, SCVOA. “Under Al’s leadership, SCVOA was on the front lines of numerous critical issues affecting villages, passionately protecting the rights and interests of our residents. The SCVOA Executive Board and the 32 member villages are proud to honor Mayor Dorman for his exemplary service.”