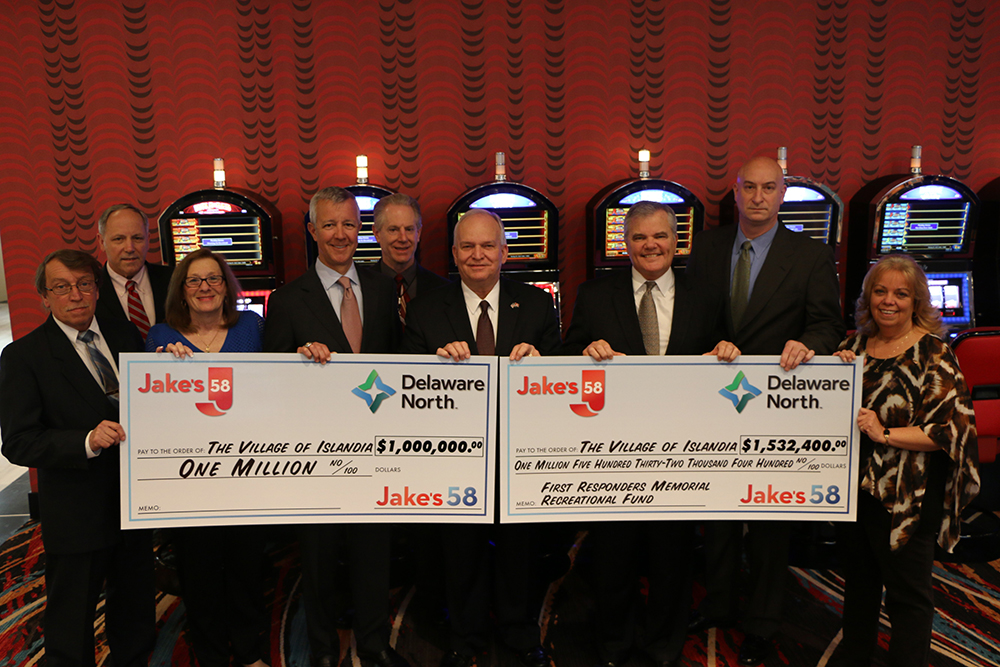 Allan M. Dorman, Mayor, Village of Islandia, was presented with two checks from Delaware North during a special ceremony that took place on February 8 at the Islandia Marriott Hotel (Jake’s 58). These payments were made as part of the Taxpayer Relief Agreement the village made with Delaware North on August 17, 2016.

One check was a payment for $1,532,400 that would go to pay for the completion of construction and development of the First Responders Recreation Field on Old Nichols Road in Islandia. The other check for $1 million would be used as tax relief payment, in which residents would see their taxes reduced by 50% within the first two years of the agreement.

In addition to the initial payments, Delaware North will make $47 million in tax relief payments to the village over the next 20 years. Meanwhile, the company will be allowed to operate up to 1,000 Video Lottery Terminals, two Suffolk Off-Track Betting kiosks and OTB simulcasts at the hotel under a special use permit that was approved by the Village Board of Trustees on August 12, 2016. The agreement gives the village the authority to review the conditions of the special use permit every two years.

“These payments are providing real tax relief to village residents,” Mayor Dorman said. “As promised, the village already reduced property taxes this year by 25 percent and will reduce taxes by another 25 percent in 2018. This, combined with the village’s continued elimination of a garbage tax, saves residents about $700 a year. This is money in your pocket. This agreement will protect the financial security of the entire village. Business owners will also get this tax relief and enable them to expand their business needs in Islandia that creates much-needed jobs for local residents.”